The Chair of the UK Foreign Affairs Select Committee, Tom Tugendhat MP, and counterparts from Australia, Canada and New Zealand, have written to the United Nations expressing concern over a planned security law for Hong Kong by the Chinese government.

The proposed law would make it illegal in Hong Kong to publicly undermine the Chinese government’s authority which has raised multiple concerns over free speech and authoritarian rule in the former British territory.

The letter states that for Beijing to impose the security law, without the direct participation of its people, legislature or judiciary, is a breach of the legally binding agreement between the UK and China which ensures that rights and freedoms will be protected by law in Hong Kong.

The letter also requests the active participation of Canada, Australia, New Zealand and the United Kingdom to actively collaborate in establishing a UN Special Envoy for Hong Kong to assist with the matter.

“What we are currently witnessing in Hong Kong is an attempt by the Chinese Communist Party to dismantle laws that were put in place to protect the rights of the public, press and others across the region,” said Tugendhat. The security law will allow Beijing to launch a complete crackdown on free speech, taking away the voice of the people by preventing any criticism of the Chinese Government’s ultra-authoritarian rule.

Donate
“We cannot allow this to happen, which is why myself and my counterparts are asking our leaders and the Secretary General of the United Nations for the establishment of a Special Envoy for Hong Kong.”

“It is our collective responsibility to prevent something like this from ever happening again. This is why we must move rapidly to ensure there is a system in place for the observation and transparent reporting of the true impact this new law will have on currently legal freedoms in Hong Kong,” said Tugendhat.

The letter to the United Nations can be viewed and read below: 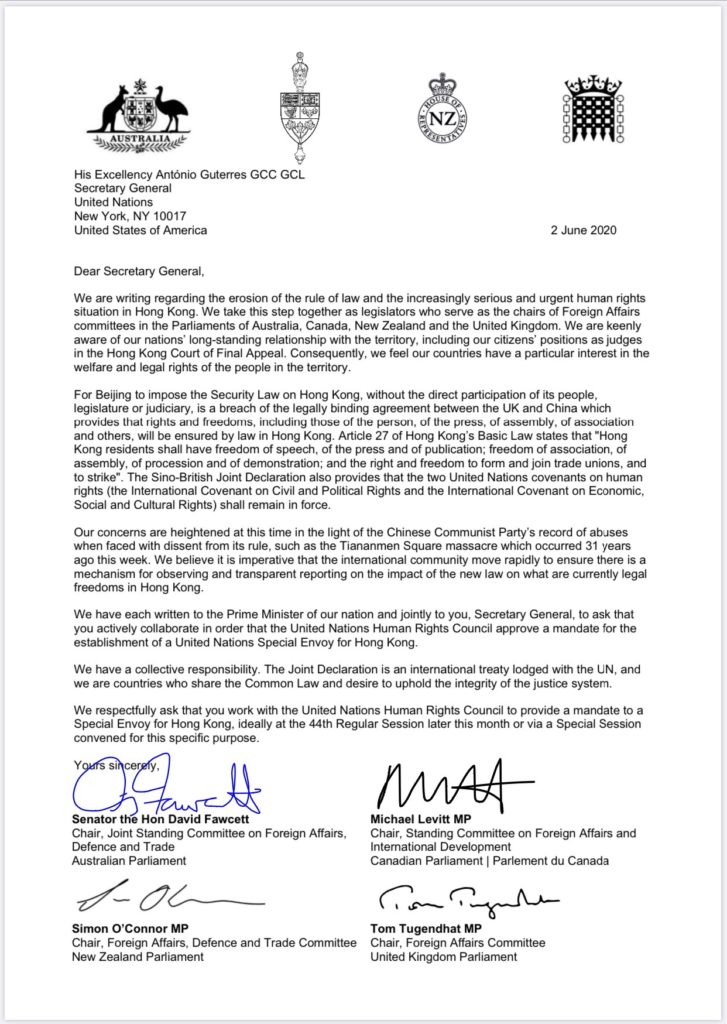